Dear English speaking friends,
Finally some news to you as well. We decided to open up a blog in order to reach all of our friends at the same time - in French, German, English and also with some pictures.
To some of you, we have not written for a very long time, and I am glad for this convenient way to get in touch with you again. I hope, you are all doing well and I would be glad to hear from you soon, even if only through a short message.
So what's up with Anki and Michael? Why the initiation of this blog?
We are in Kiev at the moment, capital of the Ukraine, former member of the Soviet Union, now trying to become a member of the European Union and maybe of the NATO as well. We left Berlin at the 12th of August, enjoyed some traveling with the train and the tandem through Poland and around Kiev, and for three now we are working in "Djerela", a center for mentally disabled children in the north of Kiev! We work here five days a week, sleep for free and pay around US$ 45 a week for good old home made Ukrainian food: borshtsh, potatoes, buck wheat, cole slaw etc. Good stuff!
Why are we doing this? First of all to learn the language of the fourth and most important nation having freed us from Fascism. (Just joking, but it is at least true for the people from East Germany…) Seriously: Last spring, Anki received her Master degree in International Project Management, specializing in youth exchanges. Now she is interested to work with Eastern Europe, I had already learned some Russian in the German Democratic Republic and for the Ukraine we did not need a visa. While the national language is Ukrainian, most of the people still understand and speak Russian.
The last few weeks we met very many interesting and kind people: just chatting with us in a park, helping us with bike problems, inviting us for tea or even to stay during the night. It is amazing, but during two weeks in the Ukraine, we got invited as often as during four months in New Zealand (Writing this without wanting to devalue Kiwi hospitality! …, sweet as, bro!). Obviously, here a tandem bike still makes some more impression than in the land of outdoor tourism.
Actually we wanted to ride the bike from Kiev to the Black Sea until the beginning of November, but it got already quite cold during the night and somehow we felt it would be better to find something secure before the real bad weather starts. Also, not speaking the language well, we felt like uselessly riding around, not feeling a sense in our traveling like we did in NZ. Maybe we are getting old…
So we rode back to Kiev, searched and found this voluntary work in “Djerela”, which we like very much. We spend the whole day with the children playing, dancing, learning, preparing lunch etc. Today we rode with some of them on the tandem bike! When they have philosophy or geography lessons, it is a great opportunity for us to learn Russian. And in general, communicating with them is sometimes easier than with normal people since they do not mind too much if we do not express ourselves correctly.
We plan to stay here until the end of October, since we can only stay in the country for 90 days. Then we might go to Tbilisi, Georgia or Ganja, Aserbeidshan, where I applied to be a German teacher.
That should be enough for the moment; we would be happy to hear from you, hugs and kisses, Anki and Michael.
By eimmitspeck - September 27, 2008 1 Kommentar: 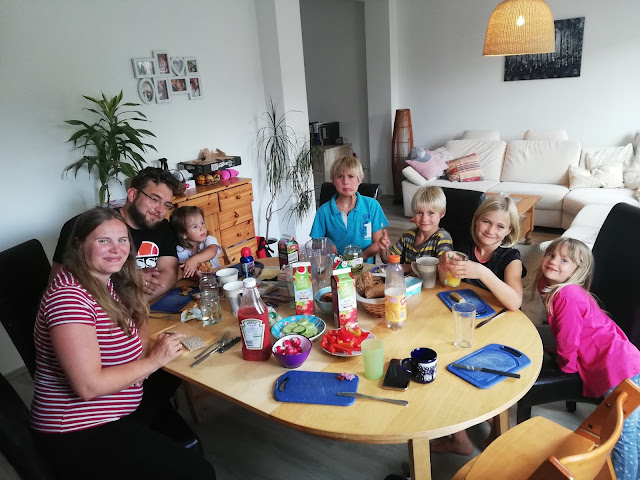